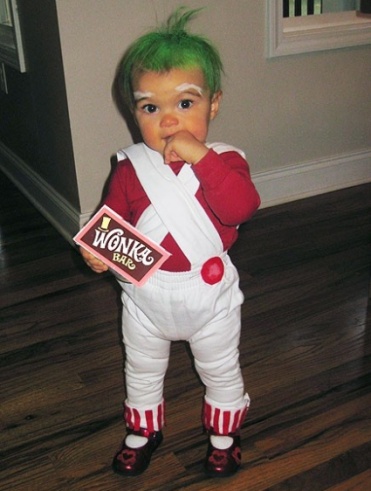 I am guilty of lying to my children.  I have encouraged them to believe in Santa, the Tooth fairy, the Easter Bunny and Oompa Loompa’s!  I made the lie more authentic by creating an email address – not for the Oompa Loompa’s, but the others. However, because i find it hard to swallow that these mysteriously pretend characters get all the praise for our hard work of buying our kids their Christmas presents….Santa and the Easter Bunny have found themselves affected by the GFC.  In fact all three of them are having some money woes.  Santa and his friends come and leave their wares, but the value of  the gifts that they bring are no longer as good as the gifts Dion and I buy!    We may have encouraged the kids to believe in these fictional characters, but they don’t get the praise that they used to get.   At some point we will come clean – I promise!  (Maybe when they are a little older).   I hear you all asking why I told our kids that ‘Oompa Loompa’s’ are real?

Well, it all started a number of weeks ago while I was in the book department at Kmart, I was looking for something quite specific and I had all four kids with me – crazy I know!  Anyway, there is a small lift in the far corner of the book department, and a red button!   Well the kids were getting a little ancy…and they found the red button,  and when one of the girls was just about to press it…

I called out ‘Don’t you dare push that button!   You will wake the Oompa Loompa’s! (What have I started??)

Now, the girls have seen the Charlie and the Chocolate Factory movie a few times and know who the Oompa Loompa’s are (Dwarf like Orange coloured men and women), but they are uncertain as to the temperament of an Oompa Loompa?  Obviously they work hard, and they are loyal workers, but are they friendly, or are they quick to anger?    Do the kids want to face a group of angry Oompa Loompa’s?   The kids don’t know what pressing that red button in the far corner of Kmart will do?…Will a group of angry, or a group of friendly Oompa Loompa’s come out of that small lift?

After a couple of weeks of reinforcing the existence of Oompa Loompa’s, the day arrived when someone from my tribe succumbed and pressed the red button. It was Bethany who pressed the button!…Bethany is our adventurous, adrenalin junky, scary ride going button pusher, so the  look of fear that came to her beautiful little face was priceless as the bell rung. I had previously warned the kids that pushing the button would make a loud ringing bell go off, and that would alert everybody in Kmart to the fact to ‘who’  the ONE was who pressed the button.  Not to mention the Oompa Loompa’s!

I don’t think I have ever seen my kids move so fast.   From that moment on, they did exactly as they were told, I was thankful I finished with what I had to do at Kmart, as we scurried to the checkouts.   They were lucky this time, but they will remember for a long time to come that pressing that button is NOT a good idea. In fact, I don’t think they will get ancy in a shopping centre ever again (I hope not)….and if they do, maybe the Oompa Loompa’s will come out of any shop with a little lift?

The ringing sound, though it was loud only lasted a few seconds, but it scared the kids.   I know the manager  at the local kmart, so I asked Bethany to apologise to the lady…which she did – of course.   She was nervous, but the lady was very nice and gave a wry smile.   Bethy saw the lady’s smile and bravely asked ‘Are there really Oompa Loompa’s working here at Kmart?’   The lady looked at me, and I gave her that look to say ‘PLEASE DON’T BLOW MY COVER!” , and convincingly she said  ‘Absolutely, they work in our security department!”.   Bethy’s eyes opened widely, she seemed happy with the manager’s answer, and was really not in a position to argue…so I think she learned her lesson – I don’t think she will ever press a button that she has been told to never press!

Now, I feel a little bad that I lied to my children, but in desperation for my 4 children to behave properly in the shops after a school day…I  went down the track of lying to them.   I will tell them the truth one day…I promise, but for now I will use these characters to my advantage, and pray that they don’t need therapy when they are older!
Another edition of surviving with sanity – parenting 101!

How to Have a Merry Christmas – Keep it Simple!!!